I first found out about Francis Bacon in an oil painting class during my sophomore year of undergrad. Around midterm, the professor gave us a list of artists’ names and told us to pick one, study that person’s work, choose one piece to recreate and then do an original painting in the style of that artist. I went home that day and Googled each artist; I remember Lucian Freud — another great Modern painter and friend of Bacon — was on that list as well, but I can’t remember the others. Bacon’s work both terrified and thrilled me (it seems that Burke was right about the sublime, yes?), so I signed up next to his name on the roster.

A little background info on Bacon: Born in Dublin to parents of British descent, Bacon (1909-1992) was, from childhood, both asthmatic and effeminate — two seemingly trivial traits that shaped his life. His father, a racehorse trainer and veteran captain of the Boer War, sought to turn Francis into the British masculine ideal, forcing him to go hunting in spite of Francis’ violent allergies to both dogs and horses. Father and son struggled with each other throughout their lives; the elder Bacon was often enraged by his son’s effeminacy and affection for dressing up, and ultimately disowned him — exiling him from the family estate — after catching Francis admiring himself in front of a mirror, wearing his mother’s underclothes. Over the years, Bacon lived in varying levels of poverty, relying when he could on the support of older, richer men (even working for a time as a “gentleman’s companion”), as well as whatever menial work he could find, until garnering success as an interior designer and decorator. He didn’t begin painting regularly until he was in his 30s.

It seems to me that it’s precisely those beginning 30 or so years of pain and struggle that gave his work, as the Wikipedia article about him puts it, that “bold, austere, graphic and emotionally raw” quality. Bacon was fascinated by disease, the Crucifixion, and hanging meat, and was a firm Existentialist, having spent much of his 20s reading Nietzsche. He sought to represent in his work the violence of life and yet described himself as “optimistic about nothing” — that is, optimistic about everything, particularly the little things in life that are often taken for granted, that are considered “nothing.” Wikipedia makes a very perceptive connection: “[Bacon’s] case of asthma can give reason to the constant ‘optimistic about nothing’ ethos… unlike most, he valued entirely such a seemingly trivial thing as breathing.” It’s that passion for life — all of it, every moment — paired with his images’ haunting, dreamy horror that draws me to his work again and again. It appeals to the raw, emotionally violent part of me, which I think resides in all of us, however small and hidden in the darkest recesses of our subconsciouses. The following are some of my favorite Bacon works. (In the interest of space, I’ve made the images small and have not captioned their titles. Scroll over the images for their titles and click on them for larger views.) 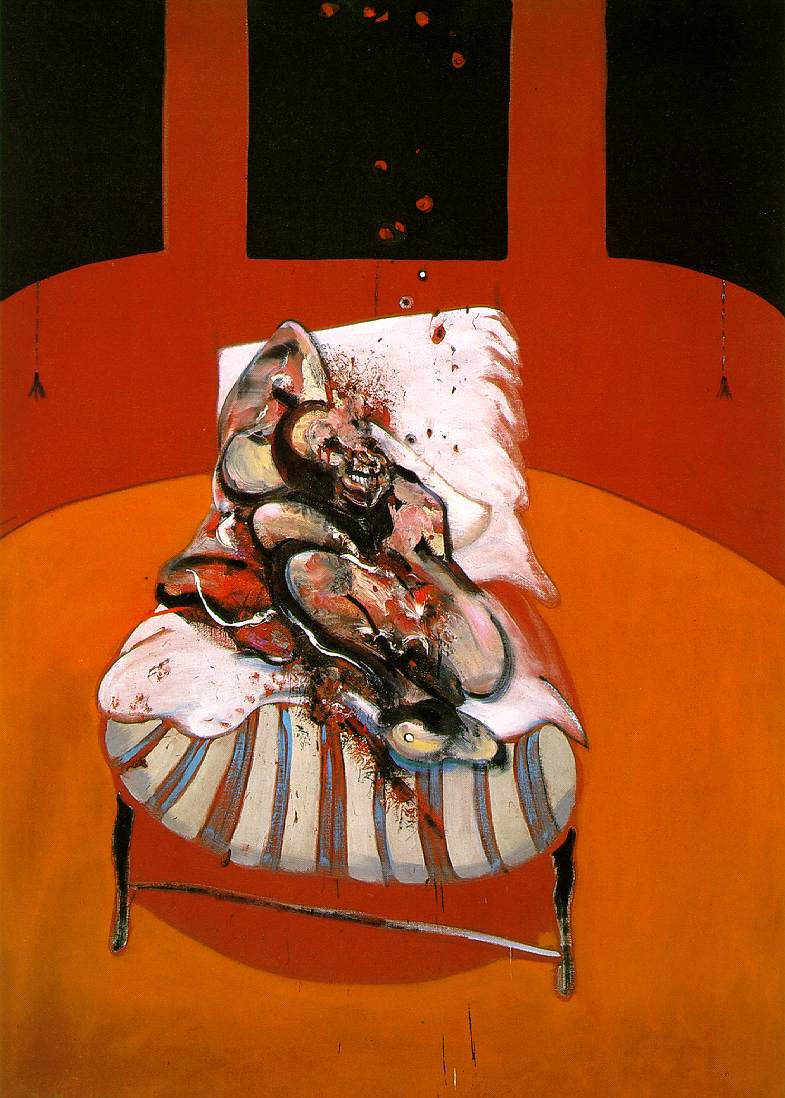 And, for the curious, my humble tribute done in oil painting class:

For snippets from a great interview with Bacon, check out this page. And for more work by Bacon, click on this link.