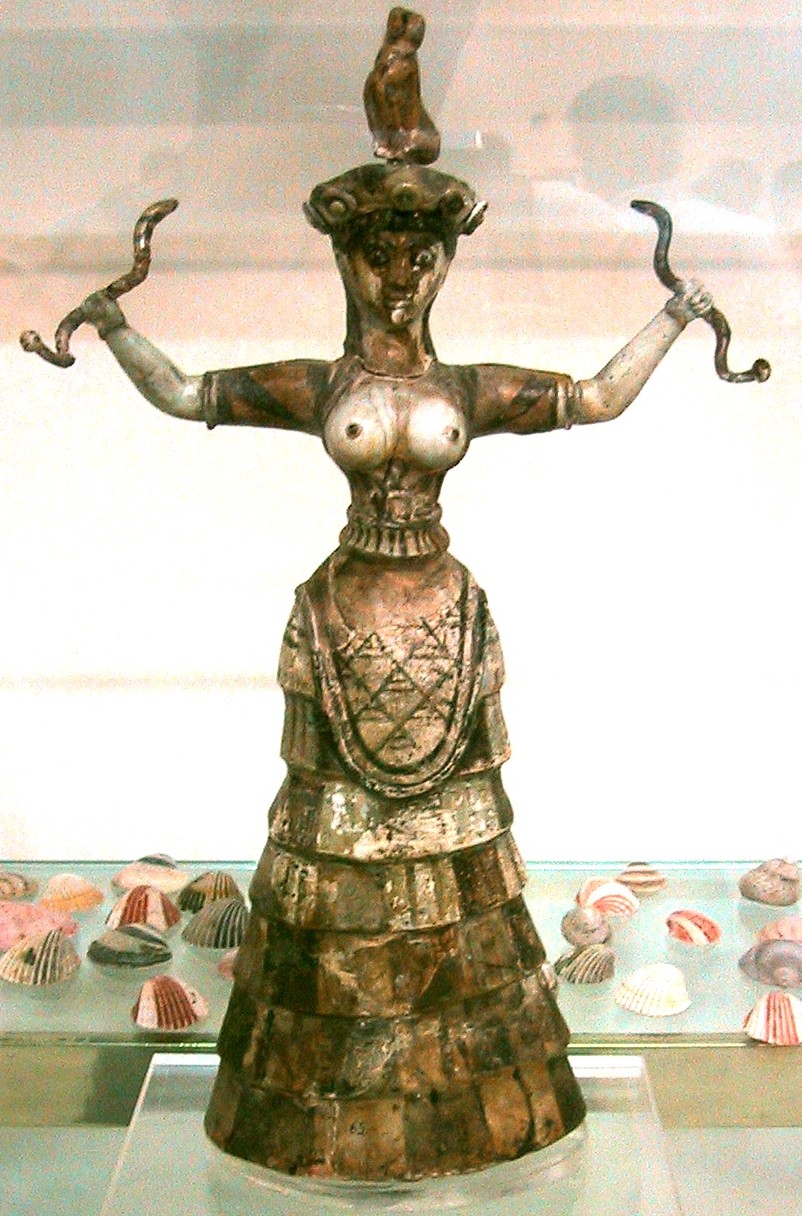 Diverging slightly from the series on my favorite artists, I’m going to focus on one of my very favorite figures: the Minoan Snake Goddess. A voluptuous, girdled figure with exposed breasts, holding a snake in either hand, she is a symbol of the ancient Sacred Feminine — with all its mystery and power — and is connected to both the Egyptian goddess Wadjet and the Greek goddess Aphrodite (the main connection with the latter being the girdle). It was discovered by archaeologist Arthur Evans in 1903 in a repository in the Palace of Knossos in Crete among similar statuettes, beads, seashells, girdles and two reliefs — one of a cow suckling a calf and another of a goat suckling a kid — all of which are associated with fertility and the feminine and therefore indicate the importance of both to the ancient Minoans. As Christopher L.C.E. Whitcombe notes on his website:

Part of the attraction of the figurines is that they can be interpreted as embodying many of the perceived, and admired, characteristics of the Minoans: their elegant, fashionable costumes, their physical gracefulness, their sensitive yet forthright personalities, their sophisticated tastes and love of luxury, their refined manners and worldly ways, their seemingly high intelligence combined with an endearing forthright innocence, and their apparent love of beauty, nature, and peace… Conspicuous in their absence are the usual signs of a male-dominated society common to the Eastern Mediterranean in the second millennium BCE: no walled citadels, no fortifications, no temples to the gods, no large public sculpture, no clear evidence of a hierarchically structured society ruled by kings and priests, no boastful inscriptions.

Several features of the figurine suggest a reverence for the chthonic power of the Sacred Feminine, which is found in many ancient cultures. The faïence glaze on the figure — created by crushing quartz into a paste, tinting and painting it onto earthenware, and then firing it — was a symbol of the renewal of life and was used in objects meant for funeral rites as well as in sanctuaries. Snakes are also symbols of renewal, healing, and the cycle of life and death, and the Snake Goddess holds two of them in her hands. Her bared breasts could indicate either her status as a fertility figure or as a figure of death (Herodotus wrote that ancient Egyptian women bared their breasts in mourning), or both. (Interestingly, Whitcombe notes that the breasts, being round and firm, suggest that the figure represents a woman who “not only is young but has also not yet had children.” This may mean that this is a deity who, while a patroness of childbirth and fertility, is still virginal, like the Greeks’ Artemis and the Phoenicians’ Astarte.) Further evidence of the figure’s ties to the Sacred Feminine is the sacral knot between her breasts, a symbol often included on objects denoting female divinity, which looks similar to the looping eternity sign and therefore may be another turn on the themes of chthonos and renewal. The symmetrical, uplifted stance — as if presenting the snakes as a message — is not unlike depictions of Moses descending Mt. Sinai or some images of Christ. It conveys a sense of great authority and power; it seems almost prophetic.

Snakes have long terrified me — I’m just now beginning to recover from my fear of them — and they’ve had a bad reputation in Judeo-Christian cultures (among others) for centuries, so I find the concept of a female, serpent-bearing fertility figure fascinating. I’m also fascinated by chthonic deities — figures representing the womb of the earth, death, mystery, etc. — because it shows a reverence for the unknown, which is so much a part of the beauty of life. I also love the idea of a powerful, beautiful female deity with multiple aspects: the virgin, the mother and the crone — i.e. birth, life and death — in one.

And part of my affection for the figurine may also be due to her beautiful costume; as Whitcombe said, the Minoans have been known for their style.