A couple of weeks ago, somehow or other, I came across the Wikipedia page for the Laughing Owl of New Zealand, which was officially declared extinct nearly 100 years ago (specifically: July 5, 1914, when the last recorded owl of the species was found dead in Canterbury, NZ). Cryptozoology has never been a hobby of mine, but something about the few surviving images of the Laughing Owl draws me in. I can’t really explain my feeling and I won’t ruin the mystery of it by trying, but it has something to do with the pathos in their shiny, dark eyes. I’m also intrigued by the descriptions of their calls, which are supposed to sound like crazed human laughter.

Fortunately, there have been reports over the years that, possibly, the Laughing Owl is not an extinct species, just small-numbered and hidden in the deep of the forests. To quote the article:

“There have been unconfirmed reports since [the extinction date]; the last (unconfirmed) North Island records were in 1925 and 1927, at the Wairaumoana branch of Lake Waikaremoana… In his book The Wandering Naturalist, Brian Parkinson describes reports of a Laughing Owl in the Pakahi near Opotiki in the 1940s. An unidentified bird was heard flying overhead and giving ‘a most unusual weird cry which might almost be described as maniacal’ at Saddle Hill, Fiordland, in February 1956 (Hall-Jones, 1960) and Laughing Owl egg fragments were apparently found in Canterbury in 1960…

“There was…[a] description of an encounter with the supposedly extinct laughing owl in 1985, by a group of American tourists camping out near the small village of Cave, New Zealand. The two travelers were sleeping in a forest, far from any other people. They were awoken in their tent by ‘the sound of a madman laughing.’ According to the campers, the sound terrified them, and they feared for their lives (being as they were so far away from civilization). When they checked to see who was making the noise, they reportedly didn’t see anyone or hear any other sign that there was a person in their camp. The travelers hadn’t even heard of the Whēkau Laughing Owl, and their story was never explained until many years later. 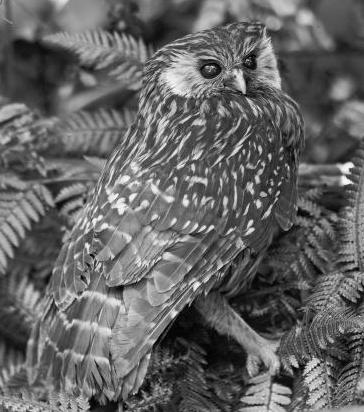 “Around the year 2000, back in the United States, an ornithologist from New Zealand came as a visitor to the former tourists’ duck hunting club in Suisun, near Fairfield, California. The man happened to tell the story of the mysterious laughing man, during which the ornithologist grew very excited; [the male former tourist] had given a textbook description of the Laughing Owl. This had been the first evidence in many years that the Laughing Owl might not be extinct after all. Though this story has never been verified, it still provides hope for the survival of the Whēkau Laughing Owl.”

For more information, check out the New Zealand Birds article on the species, or the Wikipedia article.